It’s been a long time since I’ve done this, but I finally got around to posting here again. A lot of tech announcements have come out during the last few months and instead of doing the in depth analysis of one or two news stories, I thought I would do a rapid fire quick reaction to each item and go back to them in the future if I think they warrant more discussion:

Spotify– I’ve been a vocal fan of this service before it came to the U.S. since I got to try it out in the UK. However, I’m still a little hesitant to pay for the premium streaming service. I admit streaming is very nice, but think about this: if you ever stop paying the subscription for any reason (cash is tight or Spotify goes out of business, which is entirely possible) you’re left with nothing. Yes buying a lot of music can be expensive too, but most people aren’t starting from scratch. You already have a decent mp3 library and maybe even some CDs still lying around. Also, unlike video, music is something that has a lot of replay value. Therefore you’re not constantly seeking new songs to listen to. Finally, Spotify’s library still has a lot of holes, and I’m not just talking about obscure indy music. Coldplay did not release their latest album on Spotify because they didn’t like the financial terms. So you still have to buy some music anyway. For now I’m using Google Music, which lets you upload your music and stream it on any laptop or Android device. It gives me the convenience of streaming while maintaining ownership of my music without a monthly fee.

Apple Education announcement– Many people know that I have always been critical of Apple and I was skeptical after hearing this announcement. Will it be successful for Apple bottom line? Sure it’s Apple. But will it really improve and revolutionize education as they claim? Not necessarily, especially since a large part of the problem in this country is the gap between wealthy and poor school districts. I did some quick back of the envelope type calculations and it’s hard to see how this will save school districts any money.

Let’s assume a typical K-12 textbook cost $150 and the school district can use it for 5 years before it is outdated or worn out. Let’s say a student takes 5 classes each year. Therefore, the annual cost per student under this traditional model is $150.

Now let’s see what happens if a school district decides to supply iPads to its students. We will assume that each student will get their own device and each student will have to pay for a copy of the e-textbook every year. I’m also going to be generous here and assume the iPads will be subsidized, either by the government or Apple, to a very low $300 for the 16G Wifi model  and the price ceiling on e-textbooks will remain at $15. In this scenario, we get an annual cost per student of $135.

This is a slight saving of $15 per student annually which could really add up for large school districts. However, we left out a few things from this quick exercise and made very optimistic assumptions about others. First off, there’s no guarantee educational iPads will be subsidized at all, much less by $200. Nor will e-textbook prices remain at a low $15. If these sales start significantly cannibalizing print sales, I can’t see the publishing companies just standing by idly. In addition, we’re assuming that an iPad will last 5 years. Aside from usual wear and tear (which you know will happen when you’re dealing with kids), tablet technology is progressing rapidly. If Apple continues its release cycle of at least one a year for iPads, the current iPad 2 will long be obsolete by 2017. And let’s not forget that not all schools have Wifi and schools will still need money for traditional computers. I don’t care how good the iPad becomes, there’s no way you’re writing an essay on it. Financially, it’s hard to see this model working in its present state.

Changes to Google search– A lot of hoopla was made over Google’s privacy policy change, but I think people should be more upset about Google’s efforts to make search social and individualized. To me, a big part of Google search’s appeal was that it was agnostic. It didn’t matter who was doing the search, you would all get the same results because its what Google’s algorithms objectively believed were the most relevant. If Google has its way though, everyone would in theory have different search results even if they looked up the same term. This is fine for a social network like Facebook, but for a search engine it just seems wrong. If not done properly, it could seriously erode the value of Google. Imagine how detrimental it would be if I used Google to look up a certain product, explore vacation destinations, or research a political candidate and I only got one side of the story. Philosophically, it represents a greater danger of “socializing” everything. In my opinion, part of the beauty of the Internet is to explore new information and ideas outside your worldview. For example, you can spend hours using the random article feature on Wikipedia to learn all sorts of random facts about anything and everything. By filtering the Internet based only on what you already know and like, you’re creating something that may be comfortable but closed minded.

Facebook IPO– Yes, everyone’s asking two questions: Will Facebook’s IPO soar like Google’s and should I get in on it? From an outsider’s perspective, I would say “yes” and “maybe.” I’m sure Facebook will pop like most IPOs, but there’s almost chance you will get in on it if you’re an average investor. Most of these shares will be going to employees and large institutional investors and by the time you get your hands on them, you will already be paying the post-pop price. Long term, I don’t think Facebook will fizzle like Linkedin, Zynga, and Groupon. It’s too big and demand is too high to run out of momentum. I don’t think we’re going to see run away growth a la Google’s early years either, at least not yet. Remember, Facebook did a lot of its growing as a private company and is already really saturated in its existing markets. However, I think they have two trump cards that can give them a long term boost. First, Facebook currently does not serve ads on its mobile site and apps. As mobile becomes ever more important though, I have no doubt they will monetize it eventually and see a financial windfall from it. Second, Facebook has yet to crack China and several other Asian markets. While American tech companies have had a mixed record in China, it would be one of the few ways for Facebook to significantly grow its user base. For Facebook shareholders, it will all be about timing and patience. Wait for the initial buzz to subside to buy in and then hold for one of these major events to happen.

Jeremy Lin– Not a tech story at all, but couldn’t resist. First off, I like this kid and I hope he succeeds. He’s smart and plays his heart out. Despite beating the Lakers though, I still think he’s overhyped and unlikely to be the Knick’s savior by any means. Let’s not forget that he’s putting these numbers up on a Knicks team with their top 2 scorers out. They’re desperate for any positive signs in an otherwise disappointing season, and he plays for D’antoni whose offense is really friendly for quick PGs who can shoot and make good decisions with the ball. We don’t know if he’ll still be effective once Carmelo and Stoudamire return, we don’t know if he can sustain this kind of effort over a full season, much less multiple season and probably most importantly he’s had a lot of turnovers, sometimes as many as his assists. I still think he can be an effective backup because of his smarts and handles. I can see him having a solid NBA career an energetic spark off the bench like J.J. Barea or Leandro Barbosa, but I wouldn’t bet on much more than that. 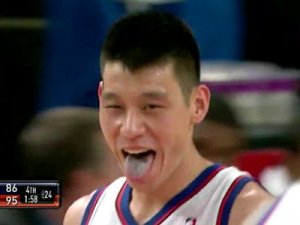 I wasn’t planning on writing another post this week, but after watching and reading all this stuff about today’s iPad announcement, I couldn’t help but have all these thoughts about the business implications of Steve Jobs’ latest creation. With most of the dust settled now, here are some of my reactions and questions:

The iPad looks really neat and I’m sure it will work really well, but I don’t think it will be a revolutionary product that will define both the PC industry and Steve Jobs’ career. Most people will not be giving up their laptop for an iPad. For one, it doesn’t look like you can’t do any serious work on it. As good as the on-screen keyboard may be, I can’t see myself writing an essay or making spreadsheets on it. It’s definitely more of a portable/media machine, but I’m not sure it has a competitive advantage there either. If I want to tweet or Facebook on the go, a smartphone will do just fine. It doesn’t do flash. I’m not sure I would watch a full length movie on it either because with a screen of less than 10″, it’s smaller than most netbooks.

That’s not to say the iPad’s completely irrelevant. It’s great for simple, portable, visuals driven tasks. There are rumors that the iPad could appear on 24 and I think it makes a lot of sense. I can easily see the iPad being used by law enforcement and firefighters to view maps of a city and respond accordingly to 911 calls. It could also be a great tool for salesmen and real estate agents to show clients pictures and demos.

If anything, the iPad will force Amazon to step up its game with the Kindle. The most promising aspect of the iPad is iBooks because it definitely looks nicer than the Kindle and it more functionality without being that much more expensive. In fact, $499 is a very reasonable price for Apple. The key here will be whether or not Apple can get the content to  compete with Amazon’s library. I don’t see how this will help newspapers though. If Apple and publishers think they can force consumers to pay for news articles, then we’ll see a quick death of both print media and the iPad.

Taking a step back and looking at the industry as a whole, I think we will quickly see all sorts of imitators and competitors pop up within the next year. They will try to undercut Apple on price and try to match its features with varying degrees of success. Most of them will fail but some may become viable alternatives (think Blackberry or Palm in smartphones). One potential competitor I’m going to keep an eye out for is Google. I think it’s only a matter of time before they come out with a competitor to the iPad. From a business standpoint it makes a lot of sense because a device like this is meant for cloud computing. Google already has the software with Android and Chrome OS. It even has the hardware experience with the Nexus One now, although a third party is more likely. If there is an announcement down the line, don’t say I didn’t tell you so.

Of course, my opinion may change completely when I finally see and touch an iPad in person. In fact, I can’t wait to go try it out when it arrives the Apple Store. I’m also jealous of all the TechTrekers who will obviously have plenty of great questions to ask at Apple this year.